Working through some fears...

*disclaimer* I originally titled this "Five Minute Friday: Ebola" but this is not an actual Five Minute Friday prompt. I haven't seen a Five Minute Friday prompt in a while and haven't done one in even longer but I felt I needed to write today so, after recess, I had the kids sit down with me and write on Ebola because I feel like we all need to process our thoughts a bit. Here are a few of mine that I scribbled out on paper in "a bit" more than 5 minutes and then added to a bit when I got on the computer. The title changed to "Some Ebola thoughts" but that isn't even true because I have absolutely no clue what it is to live in an Ebola outbreak. I feel it is disrespectful to those in the front lines of this outbreak, especially after reading this post, to even have the word Ebola in the title because I truly have no idea what they are facing every second of every day. God has used living on this side of the ocean at this time to help me address some of my fears though so the new title is "Working through some fears..." I feel that is a more accurate representation of what this post is about.

Oh, God, help. So many thoughts flood my mind when I think of Ebola, an idea that has never been far from my mind or my prayers since I first heard the (then unknown to me) word back in March.

On that day in July when Kent was diagnosed I was with the kids at my brother's house and my first word was, "NO!"

"Why does he have to die after he has been there helping so many people?"
"Why does my dear friend Amber have to become a widow so young?"
"What will those precious blondies do without their daddy?"
"Is Africa really still the white man's graveyard?"

I prayed that God would be glorified. I had no idea how He would do it but I knew that He would - either by Kent dying or somehow miraculously defying the odds and surviving - God would somehow get the glory.

In those first days after his diagnosis I  thought of those missionaries who were killed in Ecuador and the countless people who have become missionaries as a result of hearing their story. God was and has been glorified in that tragedy. I'm thankful that God chose to heal Kent and get the glory that way and still use his story this time!

The need is great in West Africa. Because of Glenn's contract with his residency program it wasn't even an option for us to go to Africa to help with the Ebola crisis but now there are Ebola patients and contacts of infected people in the US. At some point, being that we are in DFW, it is possible there might be Ebola patients at his hospital in the future. What are the protocols at his hospital? Will he be caring for said patients? I don't know the answers to these questions and so many others. The protocols are evolving even as I write this.

Even if Glenn doesn't come into contact with Ebola patients somewhere in the world during this current outbreak of Ebola he is a doctor and, as such, it is his right and responsibility to care for those in need which does put him in dangerous situations at times and will do so in the future, especially since we desire to work overseas. It is not necessarily a safe career choice but it is what God has called us to and our safety is not necessarily His first priority.

Just as living here in Texas/ our house has been molding me and helping me pre-deal with issues that will be much bigger when I am living in a different culture, different climate, surrounded by people who speak a different language, etc., having these fears surface has been good for me.

Do I have fear? Yes.

Can I trust that God is in control? Yes.

I've had a chance to try to work through my fears again and deal with the "what if?" question of losing my husband. I've come to the conclusion that, since my primary purpose here on earth is to glorify God, if He knows that the best way for me to bring Him glory is to have Glenn taken from me or some have some other dread ordeal happen then I accept His will for me and think that it is best. He is good and He does good.

We have two new favorite albums around here that play quite frequently that are having an impact on my thinking, and two songs in particular.

1. Send Me Out - the title cut on Gilbert Hovsepian's first album in English - it's great!
This song was written by the son of an Iranian pastor who was murdered for his faith. We got to hear him sing and picked up his CD at the VOM conference we went to in June.  I think knowing the story and it's source makes the songs even more powerful. We are called and we need to answer God's call, even when it is difficult. The need is great. This is a prayer of our heart:

Preach the good news to the meek
Be his voice, his hands and feet
Bring release to prisoners
By his power heal the sick.

2. Without You - for King and Country - one of my kids' favorite songs from one of their favorite artists - Caleb pre-ordered their new album with his birthday money because he loves them so much and it has been playing in our house almost contantly.

When I first heard this song I thought of Amber and how she must have felt as Kent was in the battle with Ebola and how not only were his "strong arms too weak to hold her" he couldn't hold her and she couldn't "dance a little" with him because he was contagious. The joy at seeing them together holding hands on the news will never, ever grow old for me.

Lately, as I have heard it I have been selfishly thinking of myself. Hearing this album over and over it's been stuck in my head and I thought it said, "I don't want to live without you. I'm not willing to live without you." I've battled with that because Glenn is not mine forever. He is just on temporary loan to me. We aren't promised tomorrow. If it is God's will I need to be willing to live without him because that may be part of God's plan for His glory as it was for the families of Martin Burnham, those missionaries in Ecuador, so many others throughout history and so many over this past several months on the other side of the world.

I don't know that anyone is truly ready to live without their spouse but I know that, if it is God's plan He will be with me and He will give me the grace I need in that trial to behave as His child and make that trial a blessing, teaching me lessons He wants me to learn. He is good and does good, even if, at the moment, it looks awful. I need to keep my eyes on Him and not borrow tomorrow's trouble that may or may not come tomorrow. There is a 50/50 chance I'll go first.

When Glenn gets off tonight he doesn't have to go back in for a week - hurray for PTO! We are planning on getting away for a bit as a family and I'm looking forward to it. We'll enjoy our God, each other, God's creation, time in prayer, and our time together because we aren't promised tomorrow we need to be faithful today with the time we do have.

So let's dance a little
Laugh a little
And hope a little more
Cause I don't want to live without you, without you.

And this good advice posted on my fridge from a great book based on The Great Book is what I'm practicing: 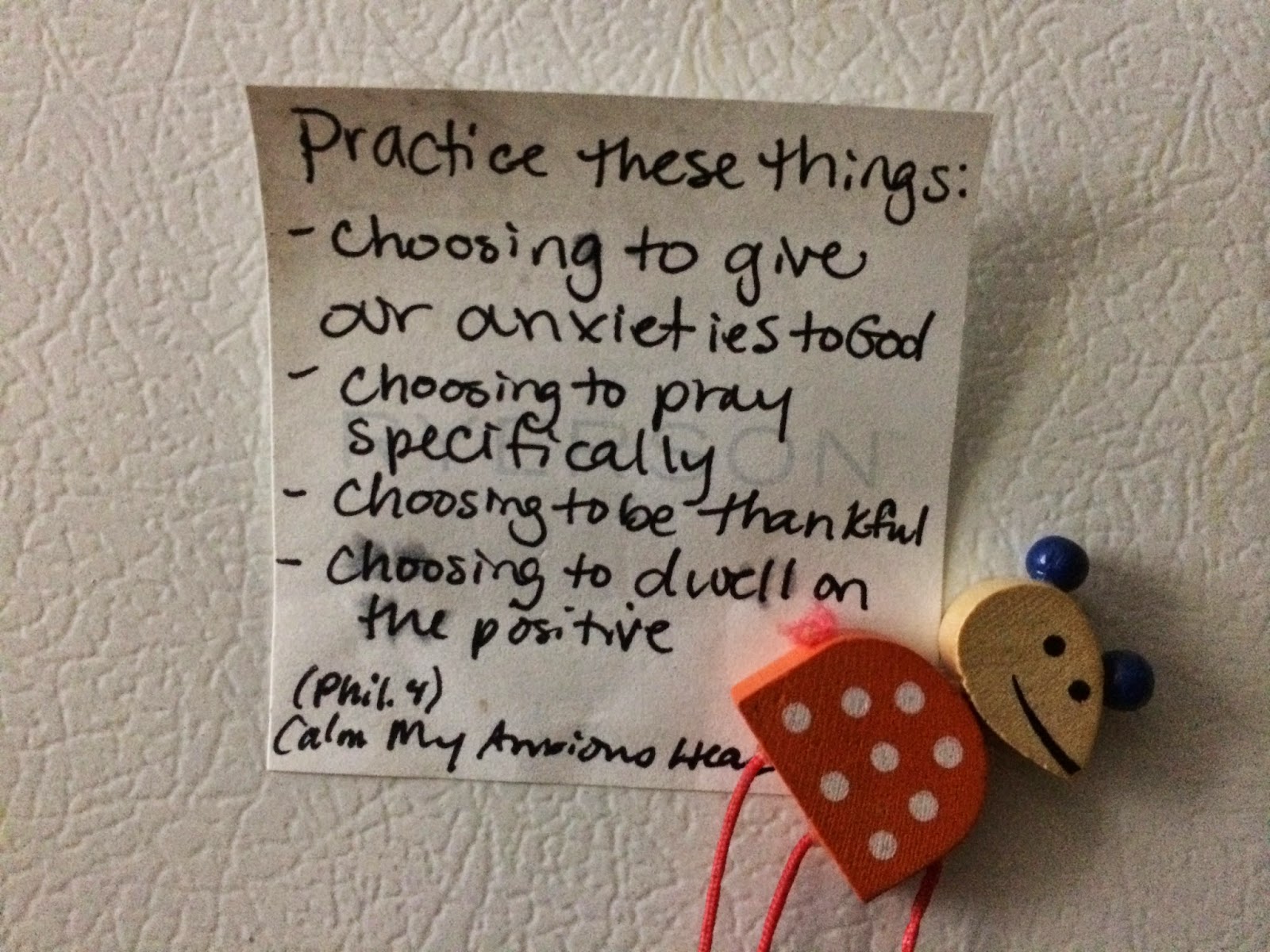 To quote a friend of mine: "The name of Jesus is greater than Ebola."
I can trust Him.
I do not need to live in fear.
Posted by Sonja at 11:02 PM No comments: