OK, this is the 2nd thing that I wanted to blog about today. The first was my "need" for a hexbike by Santana. They are so cool! (and SO expensive but would be SO fun! Living in Rochester though we could not get rid of our motor vehicle though.)

This morning I after getting up and doing my quiet time I ran to Wegmans because we needed groceries and I wanted to go without kids and before they woke up. I was planning on doing Aldis too and lollygagged at Wegmans waiting until 8 when I thought Aldis would be opened and when I got to Aldi they didn't open until 9. I was not going wait around for an hour for it to open so I ran back to Wegmans to get a couple of things that I hadn't gotten earlier and went home. (after stopping at McD's for a Mocha Frappe which we had a free coupon for - super yummy but NOT worth $2.29!)

While at Wegmans I bought some garbanzo beans because I have a new liking for hummus and when I got home I "had" to make pitas with a new recipe that I have been waiting for an opportunity to use. I think that I could eat pitas with hummus every day for lunch for the rest of my life and not get tired of it! Here are the recipes if you want to try this yumminess:

Pitas: (found this recipe somewhere online, my apologies to whomever I stole it from who deserves credit)
1T yeast
1 1/2C warm water
3C flour
1 1/4t salt
1t sugar
Knead 10-15 minutes. Put in greased bowl and make sure dough is greased on all sides. Raise until doubled (1 1/2- 3hrs). Roll into a rope, break off into 10-12 pieces into balls. Let sit 10 minutes while letting the over temp rise to 500 with a stone or flipped cookie sheet in it. Bake 3 minutes, flip and bake 3 more then store in a bag. 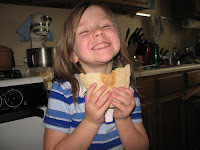 We made a lot of noise because the smoke detector kept going off. I guess my oven is not used to being at 500 degrees. Making this will take some effort but as you can tell from Hannah's smile it is worth it!

In other news I am having a Cooking Show tonight at my house. I am planning on signing up to be a consultant so if you are interested in having a party or a catalog show contact me and you can get some great hostess benefits!
Posted by Maas06 at 12:45 PM No comments:

Email ThisBlogThis!Share to TwitterShare to FacebookShare to Pinterest
Labels: food

Lots and Lots of Dough...

Jenn, one of our friends from Houghton works for Monroe Ambulance and stops in occasionally. Tomorrow is her birthday so I invited her for pizza before work tonight and we made her a cake. Caleb and Hannah were making the cake and I was making the dough when Glenn got home. I went and gave him a quick kiss and when I got back Hannah asked me what was next because Caleb had already added the sugar. Where? I wondered... He had put it in with the pizza dough that I had already started. So the bowl had 2 C plus 3t of sugar, 3 C water, 3T yeast and 1.5t salt. What do I do with it??? I hate to waste the sugar and the yeast and I do need to make bread but none of my recipes call for nearly that much sugar... hmmm. So, trustly old Betty had a recipe for "Rich Egg Bread" that calls for 1/4C sugar and only makes 1 loaf of bread so.... I made 8 times the recipe. That means 24-28C of flour!! Good thing I always buy flour by the 8 pack at Aldi :) I added some whole wheat flour to try to make it more healthy. I also broke off a chunk and added some raisins to make some cinnamon raisin bread. I'll probably make 4-5 loaves of regular bread, 2 loaves of raisin bread and make some cinnamon rolls with whatever is left. I guess I will be up a little later tonight. Edited Saturday morning to add pictures: The picture on the left below is the dough before I let it rise. I should have taken a picture after it rose... they were almost touching. It was huge! And then on the right it is the finished product that I baked this morning. It doesn't look like that much. I really thought it would look bigger. Well, at least we have bread for the next few days :) 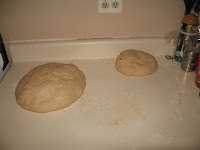 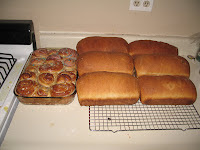 Email ThisBlogThis!Share to TwitterShare to FacebookShare to Pinterest
Labels: food

Last night during Vertical Worship (our once a month Sunday night service) I was in the nursery with Abigail and about 14 other little kids and 5 other adults while Glenn was in the service with our oldest 3. I had gathered from something that David Whiting (our pastor) said at the end of the service that the Day of Silence was going to be discussed a little bit during Vertical Worship but hadn't really thought that my kids would pay attention but they did, at least Caleb did.

This morning just before lunch Caleb asked, "Mommy, what is a homosexual?" Oh boy... what do I say? I told him it was time for lunch and we'd talk about it later. After lunch Caleb said, "Mommy, I asked you a question before and you didn't answer it. What is a homosexual?" So I dropped everything, sat down with him in a chair and we started to talk. I had no idea what was discussed last night but he told me a story that was told last night about a church that had found out that a group of homosexuals were going to picket them so they set out coffee and donuts to be a blessing to the picketers. He said that the next week another church from the area after hearing how they had left coffee and donuts outside for the homosexual picketers decided to picket that church to show their disapproval. Oh, it makes me sick, why does the church behave like that??

We had a really good talk. We talked about what made up our family: a daddy, a mommy, and kids. We talked about how in our family the daddy and mommy are married which is God's plan and how God started marriage with Adam and Eve. He knows of couples who live together but aren't married and knows that that is not God's plan, that it is sin and I told him how homosexuals are people who have relationships that are men with men or women with women which is not God's plan.

I asked Caleb who Jesus hung out with and what Jesus did about sinners. We talked about how He didn't hang out with the religious people like the Pharisees. The Pharisees complained that He ate with tax collectors and sinners. Who needs a doctor - a healthy person or a sick person? A sick person. The Pharisees thought they were fine but the "sinners" realized that they needed a Saviour. Then we got talking about sin. I asked Caleb which he thought was a worse sin in God's eyes: killing someone or snitching an extra piece of chocolate when you were only supposed to take one? He was silent for a minute then said, "Mommy, that is a hard question." More silence. "I think maybe killing someone." I told him no... sin is sin. God sees them as exactly the same. He looked at me and I could tell he was trying to come up with something then he said, "Like that verse, 'Whoever keeps the whole Law and stumbles in just one point is guilty of breaking all of it.'" Right! In God's eyes, sin is sin. In our eyes we think that snitching a piece of chocolate, stretching the truth, going a couple miles over the speed limit are not bad because everyone does it but killing someone is really bad because you would go to jail. We talked about how we all sin and make wrong choices, even if we are Christians and that is why we need Jesus.

I was really nervous going into this discussion. What do I say? How do I talk about this with my 7 year old? (and with his 5, 4, and 2 year old sisters hanging around.) but it was great. What an opportunity! Thank you God for this opportunity to share with my kids more about You and their need for You. Thank You also for the reminder of the seriousness of our sin in Your eyes. Please help us to take our sin seriously as well. Thank You for Jesus and forgiving me for my sin.

PS. I just read this to Caleb and he wanted me to add "I told you the story of the man that told the rich man to sit in a good seat and there was a poor man and he told him to sit at his feet." It was another part of our conversation. I am not sure where it fit in but he thought it was important so I am adding it. :) I am so excited to see how God is growing my boy!
Posted by Maas06 at 12:47 PM 1 comment:

Today has been a good day for us. Rochester gave us a great April Fool for today - 60 and partly sunny! Yeah! We got some school stuff done and walked to Linden Meigs Park to play on the playground. We left home at about 10:30 and didn't get back home until after 3:15pm. It was SO nice to be outside! It was supposed to rain but we only got sprinkled on twice. We made a few new friends and even got phone numbers for a couple of people. For the last half hour or so that we were at the playground there was a 10 year old boy and his 7 year old sister that homeschool. It was fun for Caleb to have someone to play with. They live close to the playground so hopefully we will be able to meet up with them there again.

Poor Glenn had to spend all of this glorious day in the hospital. When he called on his lunch break I asked him if he had been April Fooled and he said that one of his patients that has been there the whole time he has worked there got him but other than that no one had gotten him.

And for supper of course we had to have something fun so we had cake. Lydia laughed when she saw our supper. She said "It has green frosting... and there's peppers on there!" I had made this cake before and put real sprinkles on it and Glenn wasn't impressed so I cut up carrots and green peppers for the sprinkles. "and there's ketchup!" It was fun. 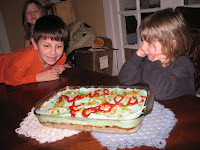