Flashback: There's a Chicken in my Bathtub, What's new with you?

Wednesday I saw pictures and the status from last year on my Timehop announcing that Rahab "found" a chicken in our back yard and I realized that I had never blogged about it. (My blog has been pretty much neglected since we left Lowville, not for lack of things to write about.) As I was talking with Glenn about it he told me that it should have been included in my how this house is preparing us for life overseas post since it reminded us of a recent blog post on a blog we follow of a group of people living in Burundi about being given some birds and having them live temporarily in their schoolroom bathroom.

So, as best as I can remember it, here is the story of the chicken in the bathroom...

A year ago on a Tuesday morning I let Rahab, our German Shepherd, out to go to the bathroom. I heard a bunch of squabbling in the back yard and I was afraid that the new chihuahua puppy from next door had somehow gotten through our fence and Rahab had gotten a hold of her or one of the older chihuahuas. (Rahab has never gotten a hold of one of them, thankfully, but their barking annoys the daylights out of her... and us.)

On further investigation it really didn't sound like a dog and then I saw feathers flying. "Oh no! It is a bird!" I thought as I tried harder to get Rahab to stop pursuing whatever it was. Finally, after a game of "chase, catch, escape" around the yard the chicken got away under the neighbor's fence and I got Rahab back inside.

When Glenn got home that evening we saw that the chicken was still huddled up behind a bush next to the neighbor's house. He got permission to go beyond their gate to check on it and we ended up putting it into a box. There was a bit of a chunk of feather's missing from her breast but other than that she seemed like she was not too much the worse for wear from her tussle with Rahab.

Now we had a chicken... what to do with it? None of our neighbors seemed to know who it belonged to and it was getting dark so into the house it went in a box. Glenn took it out and formally introduced it to Rahab 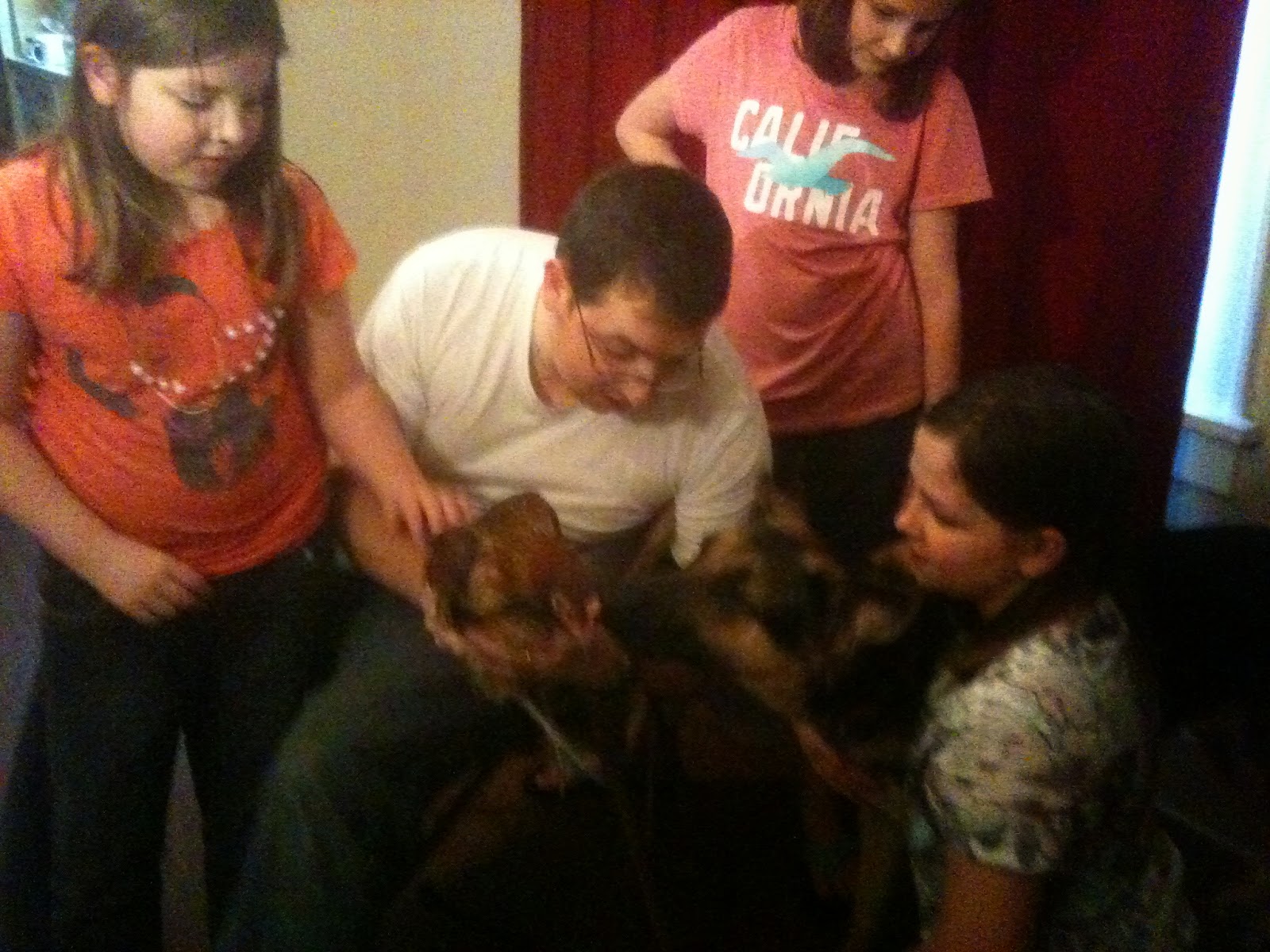 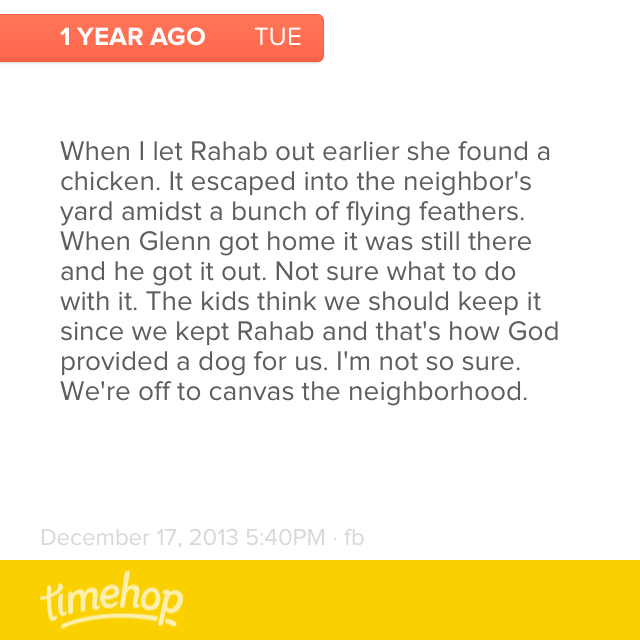 I got lots of advice on what to feed it and what to do if we decided to keep it and how we really would need to get others because chickens are social animals and don't do well alone. We knew we couldn't keep it in the box so we moved it into our bathroom and gave it some water, rice, and veggies. 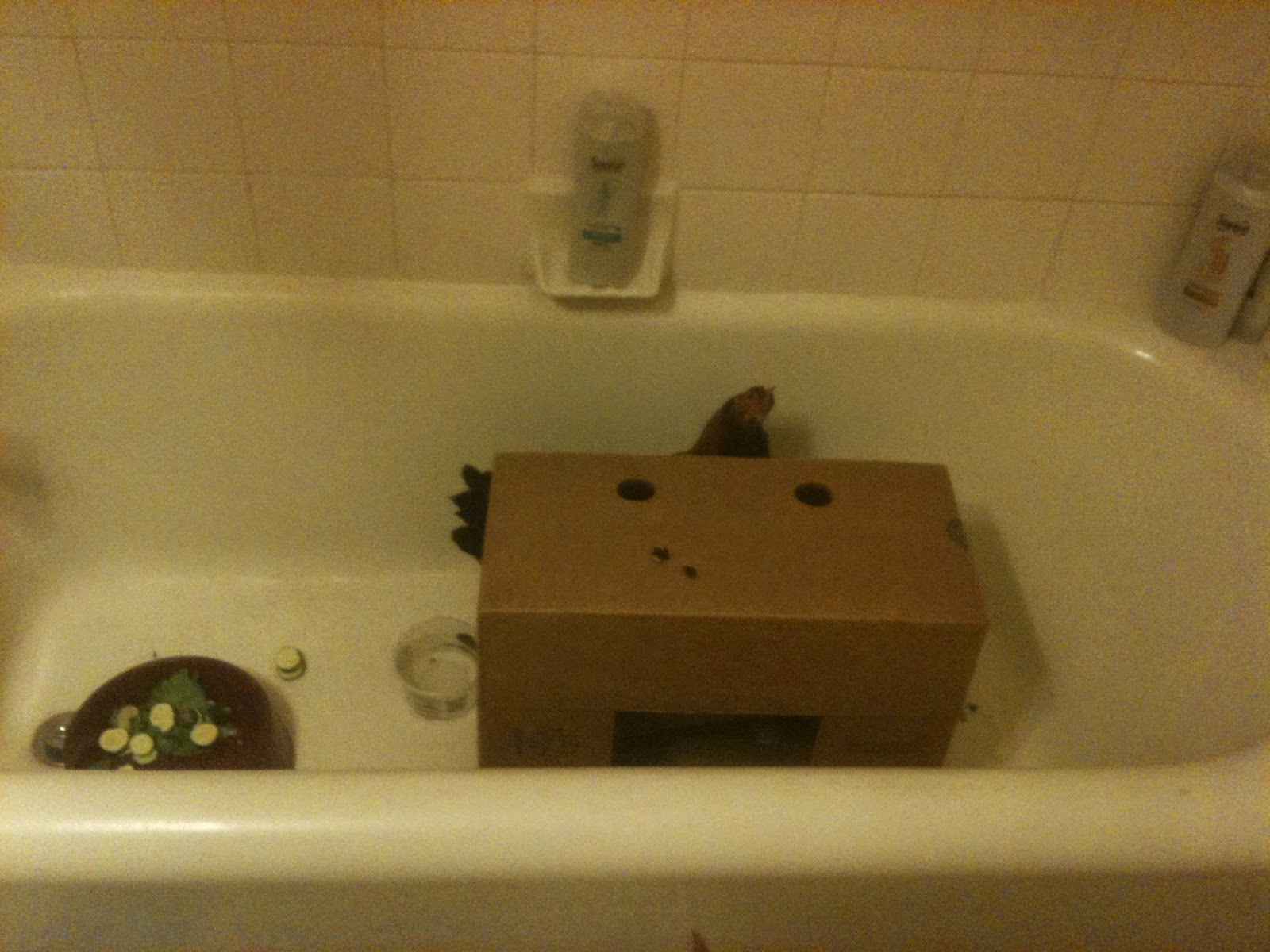 The chicken was great entertainment for us for breaks during school. It was fun to peek in and see what she was up to (good thing this house has 2 bathrooms so we didn't have to pee in there too!). 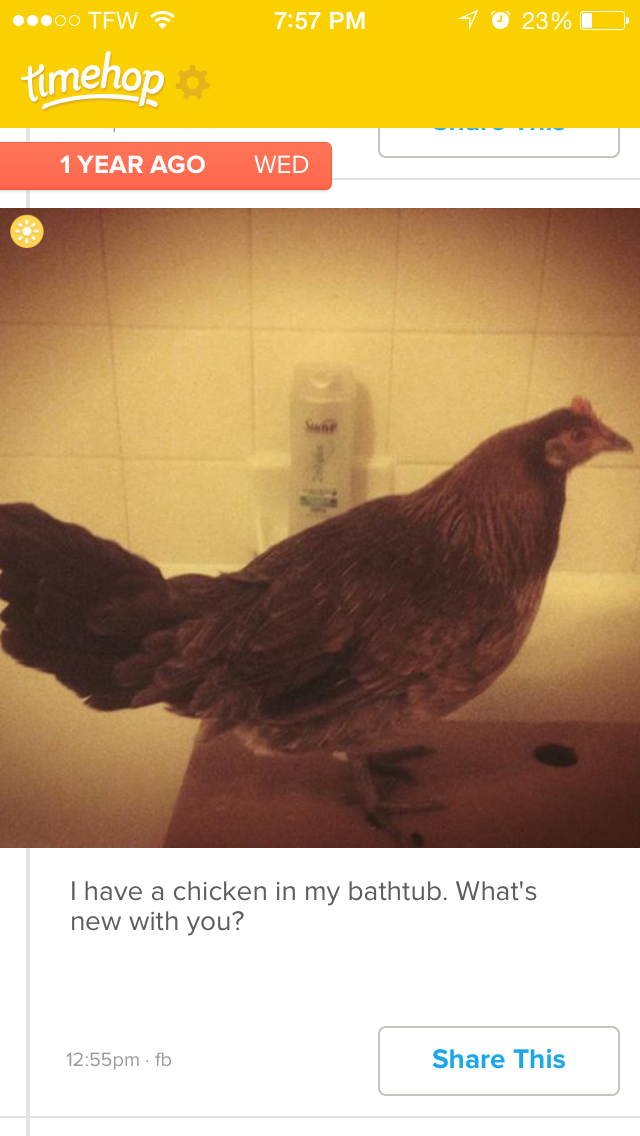 She got bored with the bathtub and decided to play on the sink. 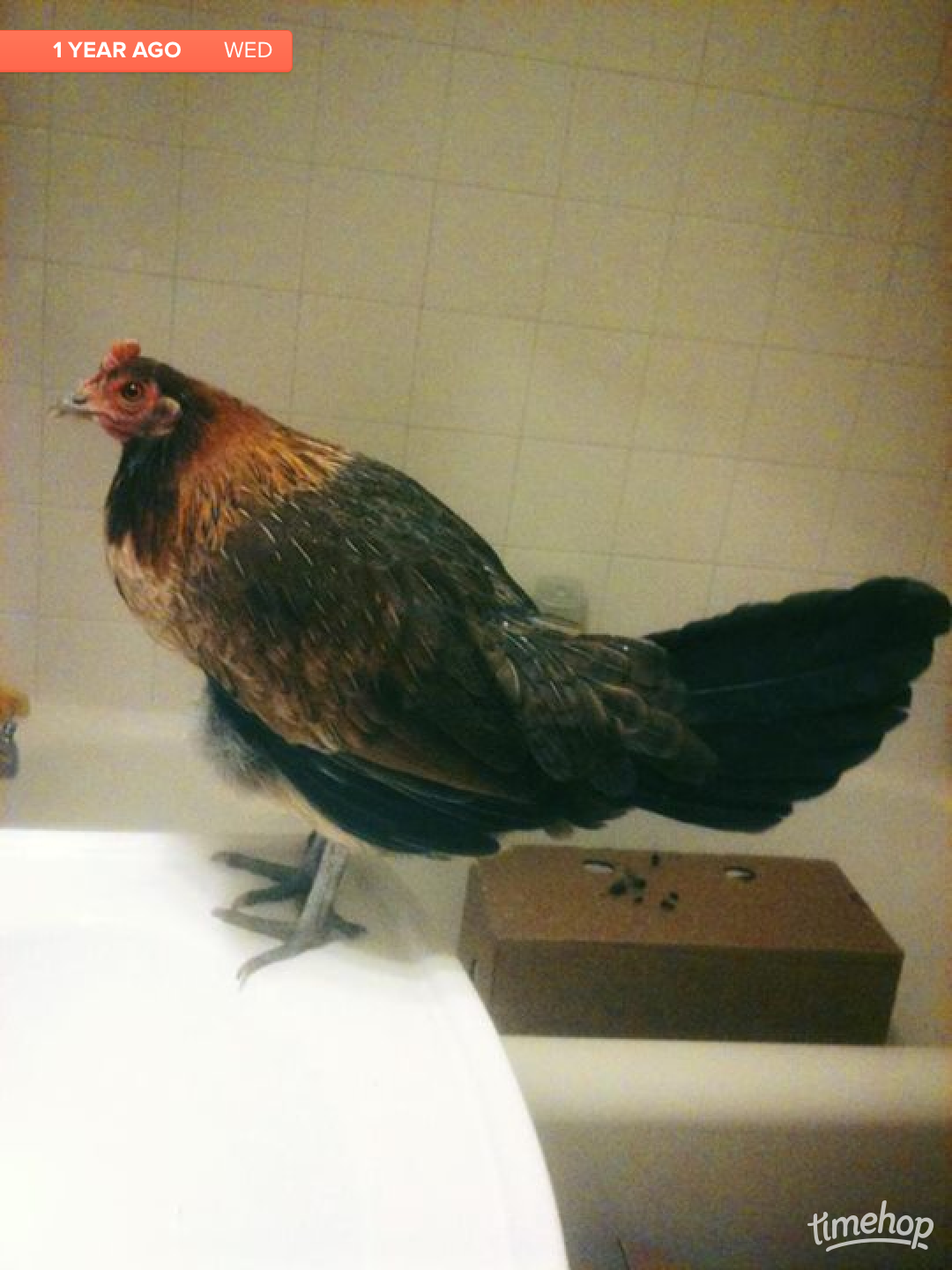 We asked more neighbors about the chicken and some neighbors offered to eat it for us and some others pointed to one house that might be the owner. We put our phone number with a note in Spanish and English on their door and hoped to hear back. We wandered the streets and the alleys around us looking for evidence of chickens in people's yards and putting bilingual notes with our phone number but had no response. 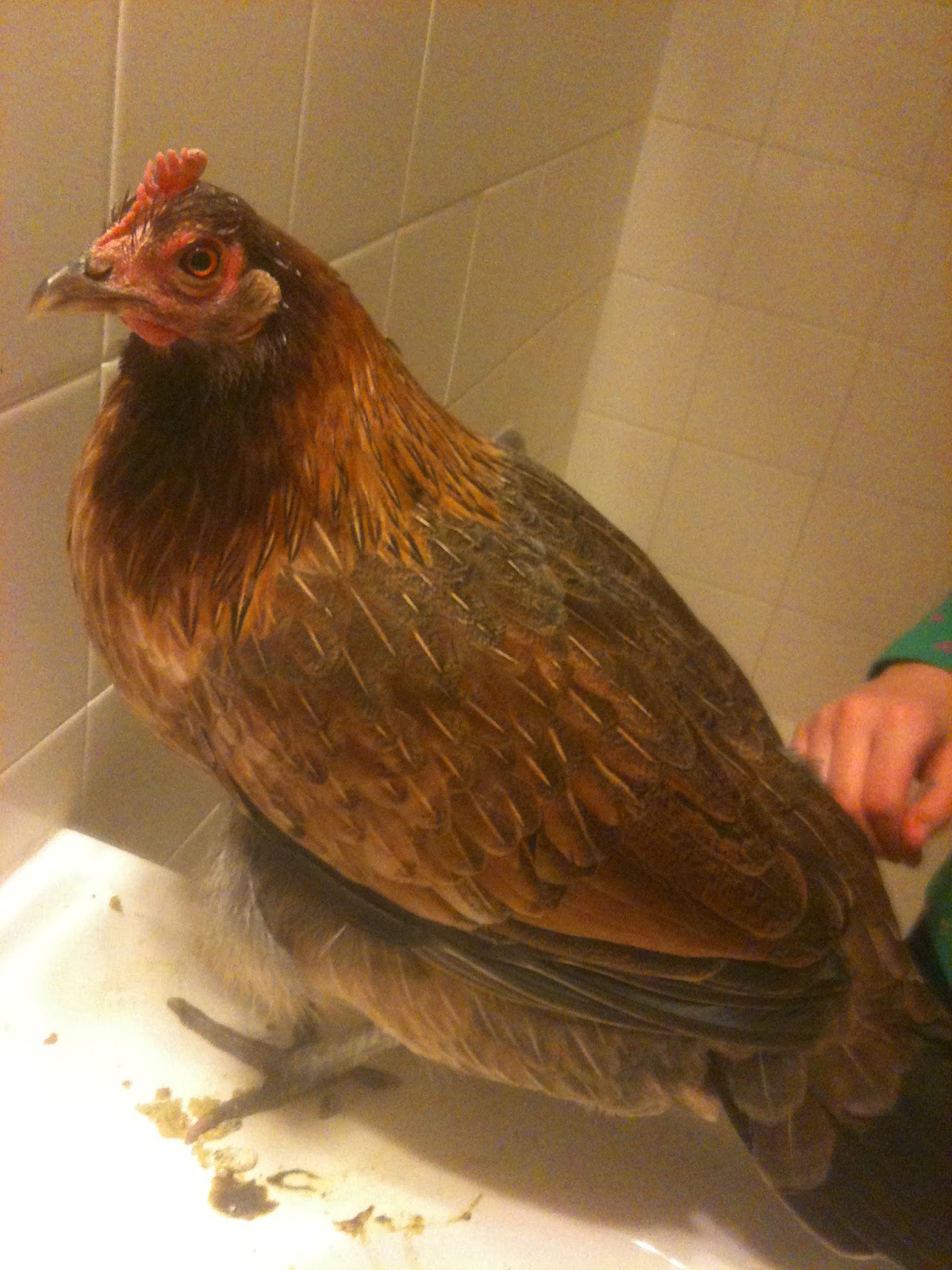 So we had a chicken. In our bathroom. It was always interesting to see where she was when we'd visit/ check on her. Sometime she was on the sink, 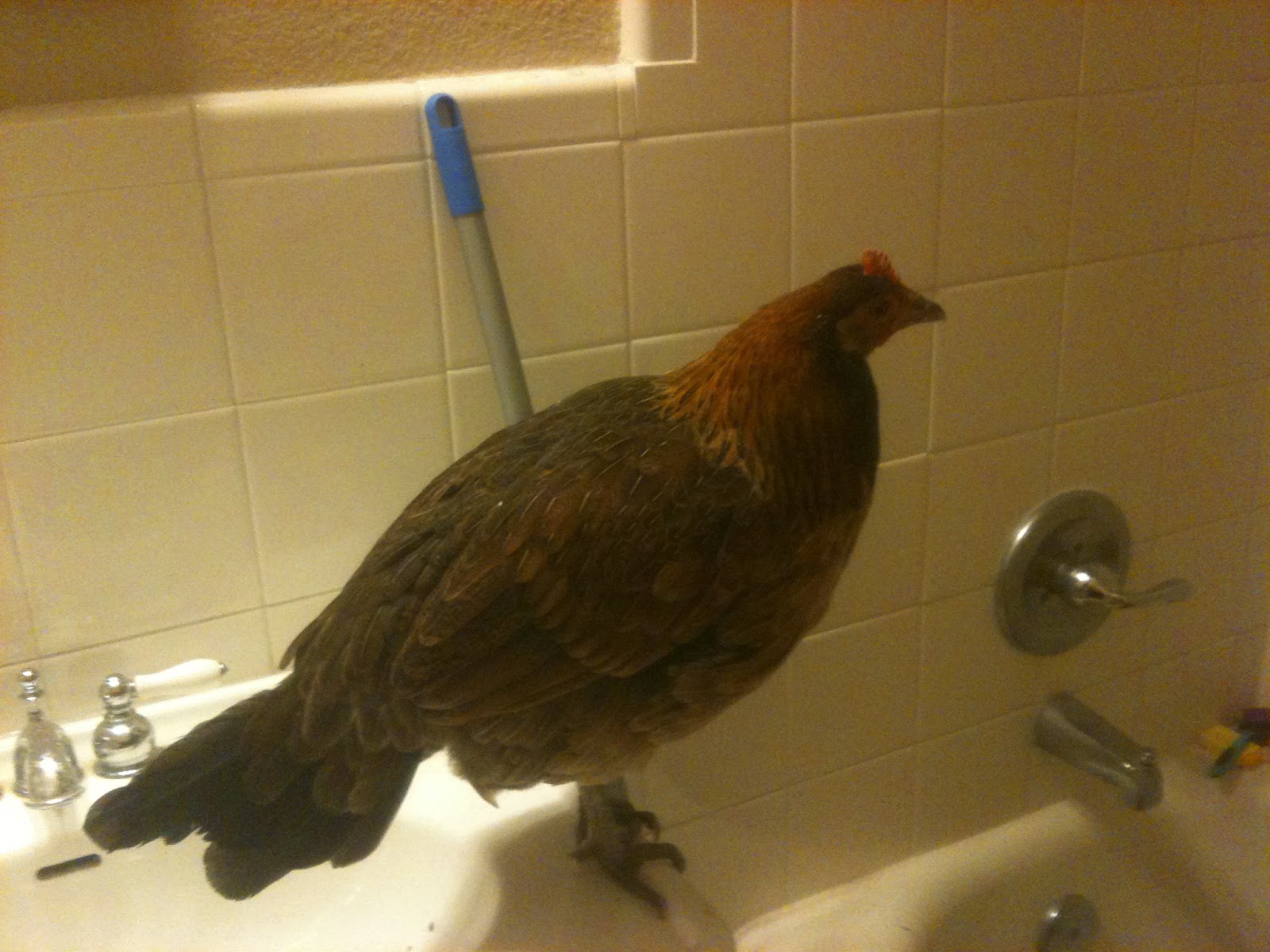 sometimes she was on the mop handle "roost" we put over the tub, 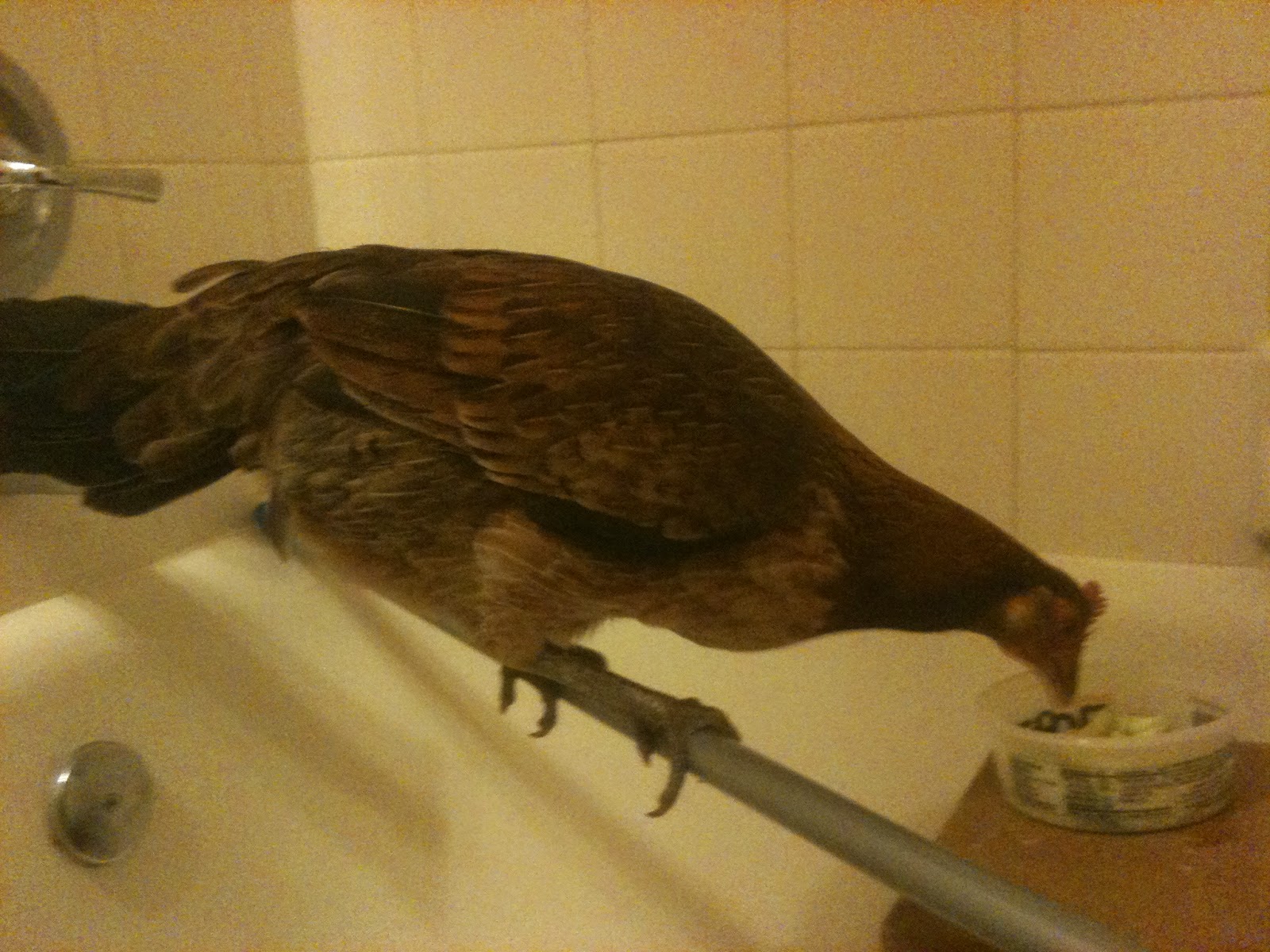 and she even figured out how to roost up on our shower rod. 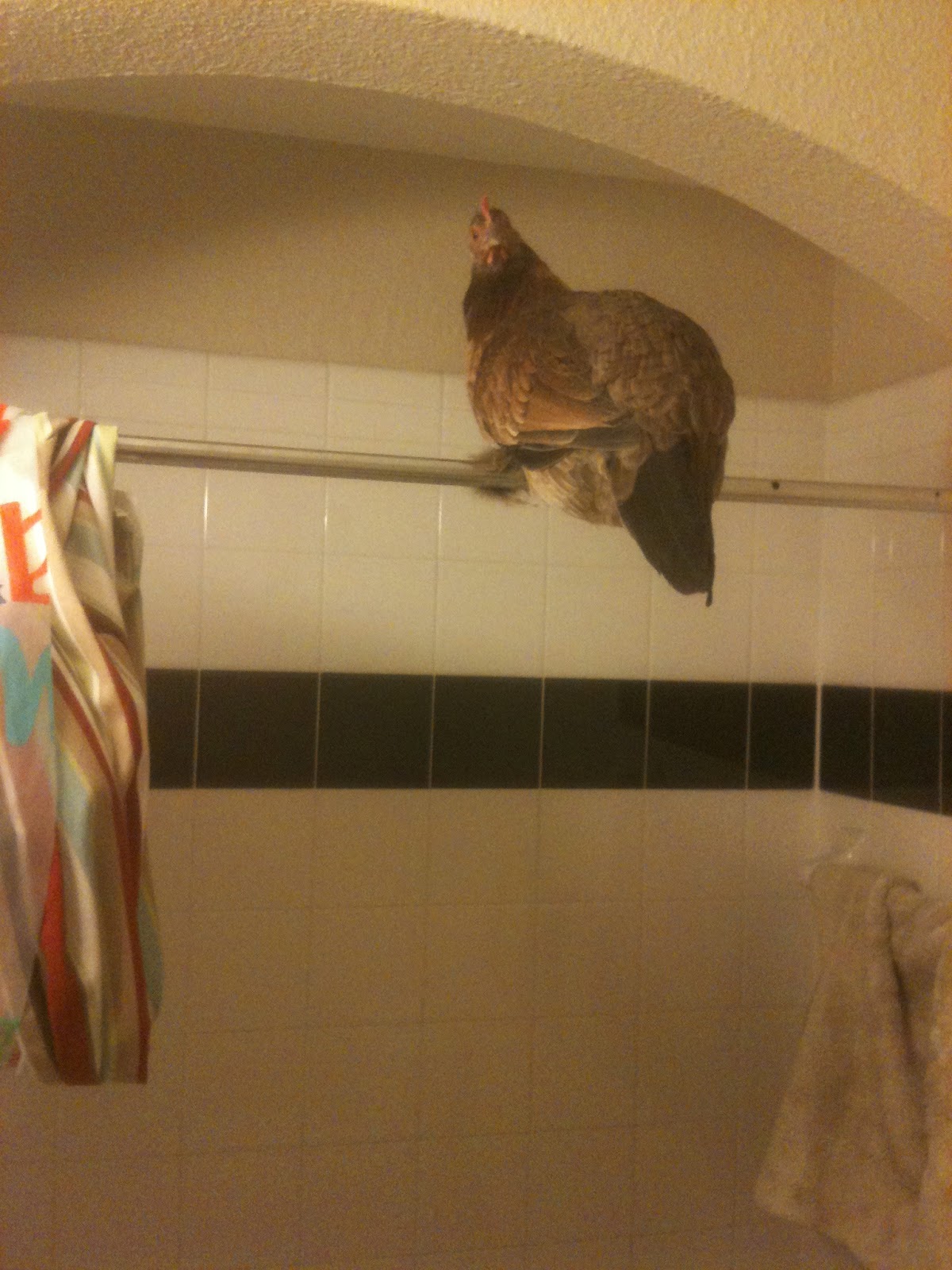 As entertaining as it was to have a chicken in our bathroom it really wasn't sustainable. Since we couldn't find whoever owned her and keeping her, building her a coop, and adopting other chickens so she didn't get lonely wasn't something I was up for we looked into other options. A few local friends told us that they had considered getting chickens and might be willing to take her, one friend really wanted her but worried how she would interact with her other babies, er, I mean chickens. It was starting to seem like we'd have a permanent visitor in our main bathroom.

That Thursday night our Sunday School class helped out at a Christmas party at church and we told our friends about our dilemma and showed them pictures from my phone of our bathroom fowl guest. The teacher of our class was interested in her because he had always wanted an Americana so he decided to come over afterward and take her home to live with his chickens.

Below is a picture of a couple of our girls saying good bye and her new child owner meeting her for the first time. The girls decided to name her Penny Peacock Har-Maas and off she went to her new home. 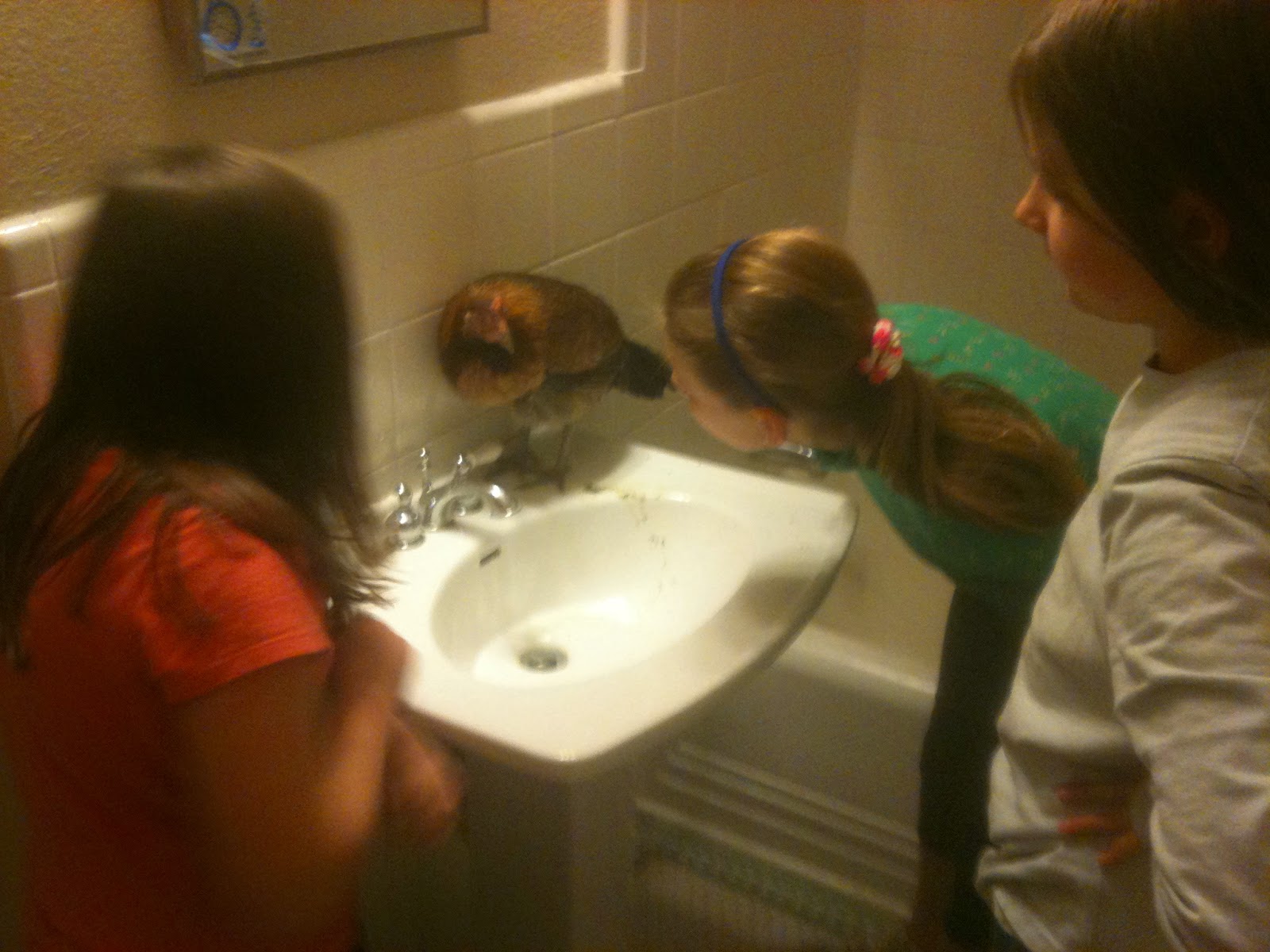 I, for one, was thankful to be able to get out our steamer and clean that bathroom that was no longer a chicken coop.

It turns out Penny has a street chicken attitude and was a bit of a bully to the suburb chickens in the small flock she joined but they worked out the details and she's still living with them and doing fine last I asked. Several weeks ago her owner was working in our neighborhood and found the home where, most likely, Penny came from but the previous owner said he could keep her.

After this experience I'm not sure that I ever want to own chickens but I can say that the bathroom is not where I would keep them if I did.
Posted by Sonja at 12:31 AM No comments:

Email ThisBlogThis!Share to TwitterShare to FacebookShare to Pinterest
Labels: flashback, Fort Worth

I love my small group.

We were a part of two different awesome small groups that helped us so much through our ups and downs in Rochester. Shortly before leaving Rochester I was filmed on a video for church talking about how great small groups were and how it was the first thing we'd look for in a church when we moved for med school. I even blogged about it here.

When we moved for Glenn's rural rotation I was invited to a ladies Bible study and was warned by Lynn that I'd be asked four questions and I'd need to be prepared to answer them:
- How are you doing with your husband and children?
- What temptations are you facing and how are you dealing with them?
- Are you spending time everyday in God's word and in prayer?/ What are
you learning?
- What can we pray for about you?
It was a bit awkward at first but it was great. I grew and changed because I knew every other Tuesday night four ladies would be looking at me and asking me how I was doing and reporting in to me how they were doing. It was a very special part of our very special months there.

Our church here doesn't do small groups. Well, I guess, technically, they do but we couldn't figure out how to get involved in one because they're through the Sunday morning Bible studies and our class thought it might be a good idea and we met once or twice a month but with everyone's schedules and the distance we all live apart it just didn't work out.

Over the summer a fellow resident wife friend and I started talking about how being a part of a small group was something that we both really missed. We talked with a few others and it seemed a common theme so we had a brainstorm meeting about what starting a small group together might look like for us as a group of residents and spouses.

We've been meeting for a couple months now every Monday night with 5 other couples and a single guy. We've never all been there since over half of the members are residents but it's been great. We meet as a group for the first half and break up by gender for the second and those four accountability questions from my Tuesday night group get pulled out with the ladies.

It has been so good. I'm not really sure how I once again survived this long without a small group and I'm so thankful to be a part of one again.
Posted by Sonja at 12:29 AM No comments: